My name is Rosemary and I am an Aboriginal woman from Richmond, NSW. I’m also a volunteer with ICV, so when you make a donation, it’s people like me you are sending around Australia to help communities in need.

I really want you to know how much of a difference a donation can make to the lives of Aboriginal and Torres Strait Islander people. 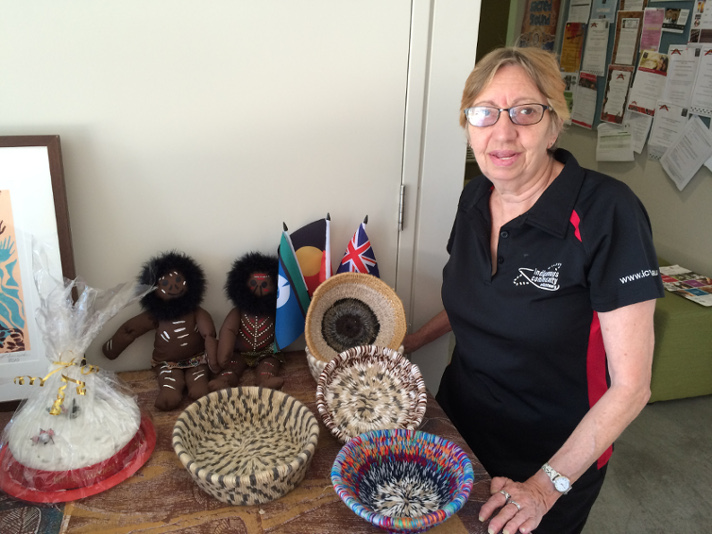 And I thought you might like to hear about some of the people whose lives you can change for the better. Including mine!

I grew up knowing that I was Aboriginal and we were very much part of the Aboriginal community. We lived on a piece of land which was part of the historic Tizzana winery at Ebenezer, near Windsor, in the beautiful Hawksbury region of NSW. It’s where a lot of our family had worked over the previous 100 years or so. Then in the 1950s we were moved to the Mission at La Perouse, which is where I spent my early childhood.

I went through primary and high school in central Victoria and left to join the public service. But my dream from a very early age was always to help people learn to read and write.

Like many children, my father was a big inspiration in my life. He was a wise, knowledgeable man. I could sit down with him and discuss absolutely anything. He was very aware of politics and current affairs, and got much of his news from the ABC television and radio. It was only after my father’s death 20 years ago that I found out he couldn’t read or write! That really strengthened my conviction to learn how to teach adults, especially Aboriginal adults, to read and write.

Life happens, of course, with marriage, children (my two girls are now 35 and 37 with beautiful children of their own!), work and mortgages to pay as a single parent. So it wasn’t until I was 55 that I was finally able to go to university. I did my Bachelor Degree in Adult Education with two majors, Aboriginal Studies and Language, Literacy and Numeracy, while working full time as many people have to.

It was during my Master’s degree when I came to know about ICV. I knew immediately I wanted to get involved, because the way ICV works with Indigenous communities is the right way, the only way.

But that’s enough about me, now I really want to tell you about the people you have helped change their lives for the better. I wish you could meet them all in person, because they are all incredible people with their own stories to tell.

Punmu is a remote Aboriginal community in the Martu Lands in WA.  On my first trip there, I was working with six men who wanted to get a job at the local Telfer Mine, which was doing a ‘shut down’ for maintenance and cleaning. But to be employed, they needed a good resume, to talk about their skills and experience in English. I was so happy when I later heard they all got work at the mine. If it weren’t for donations from people like you, they wouldn’t have got that work.

The literacy and numeracy work that you made possible has really built their confidence and self-esteem. They are setting new goals and grabbing life with both hands!

The second time I was in Punmu, plenty of people wanted to be able to read and understand newspapers and magazines. And they wanted to write letters to their families, and to understand formal letters from government, police and that sort of thing. These are critical things for people whose first language isn’t English.

One lady received a letter from the Australian Electoral Commission saying she was being fined $50 for not voting in an election. All she saw on the letter was ‘$50’ and ‘Fine’, so she was really concerned about it. After going through the letter and helping her understand its meaning, we worked together on her response and stated her cultural reasons for not voting, as she was travelling for a funeral at the time.

Before ICV starting doing literacy work with the people of Punmu, many letters like this would have been thrown in the bin because they couldn’t be understood. So the help you and I are giving communities is functional and practical.

Whenever I go out to Punmu, I take copies of the Koori Mail, people love to read it! A couple of the ladies I help like reading the paper out loud. They point to words they don’t understand and we discuss the meaning and the context.  They really like the stories about families, and many learn to write their own family stories.

One lad wanted to get a job in mining, and was looking through the job adverts in the Koori Mail. There was an ad with a chart listing the mines and their locations (longitude and latitude). Aboriginal people have really great spatial understanding, but he struggled to read coordinates on maps. I sat with him and we went through the locations on a map of Australia I had with me. He found the mines and was looking at the map thinking ‘how many days drive is that?’ He was combining western knowledge of position or location, with the traditional knowledge of how many days walk or drive is to get somewhere.

The way we work with people at ICV is very unique, and it’s something I really want you to see from an Aboriginal perspective. The usual way of learning is in a classroom set-up, with the teacher at the front, and students sitting in rows. But that’s not the way we learn or want to learn. It brings a great deal of shame to adult Aboriginal people, who feel like little children trooping off to school.

We much prefer to work in a one on one situation, and so I always ask, “how can I help? What is it you want to learn? What’s the best way to help you learn?” It takes time and patience, and gentle questioning. In Punmu, it’s a little bit more relaxed now because we have been working with them for some years. I find that even sitting outside with a cuppa, yarning with people, it’s actually helping them with literacy without it being obvious. They don’t see me as a teacher, I’m just Rosemary who’s going to help them with reading.

The rewards of helping in this way are incredible. The personal reward for me is being able to have passed on a skill, and then seeing the satisfaction on people’s faces when they achieve something. It’s a smile, it’s in someone’s eyes, it’s in a simple thank you… you see just what it means to people to get the help they want to make their own dreams come true.

Knowing what I’ve done has helped someone else is just priceless. But I can only do this because people like you donate to ICV. Thank you!